What a gorgeous morning for a parkrun!

Albert Park was teeming with runners for it’s 7th birthday celebrations which saw Julie Berriman crowned the top lady for the year, having accrued the most points!

It was a milestone day too with Oliver W getting his 10th run and Tracey finally cracking her 50th!

The PBs, however, were in short supply with many holding back ahead of tomorrow’s Middlesbrough 5km. This didn’t stop Oliver from marking the event with another PB making it 3 in a row!

Despite hating hills (and often hating running in general!) I was talked into a 5 mile race up and over Roseberry Topping. Having lived in Teesside all my life, I am not a stranger to this landmark and had most recently climbed to the summit with the children.

The evening was beautiful – sunshine but not too hot and I was looking forward to taking in the view from the top, though less keen to actually get up there! I met two friends in the car park – runners from Elvet Striders who seem to find this kind of thing fun!

Soon we were at the start line which was on the rough path which leads from the car park. A gentleman positioned himself at the back and announced he was the back marker – I went and introduced myself as I suspected we were to see a lot of each other!

The race started with an uphill incline – within a few hundred metres several people were already walking! However, once through the gate at the top of the path it levelled off and even had some downhills….. but of course, what goes down must go, erm, up! The route was beautiful and took me through places I had never seen before! Previously I had gone straight up and straight down so the woods were a revelation to me!

Soon it became clear that we were heading up  and I had to resort to walking several times. Up….up… up we went, then I glanced to the right and there, in the distance, was Roseberry Topping. Wait…. what??? I have to admit to feeling a bit defeated at this point! What on earth was I climbing if not Roseberry Topping? And how do we get up there? Still I pushed on, battling for last place by this point which I soon claimed as my own. We finally reached the summit of whatever this mound was then were greeted with a lovely downhill stretch which I would have enjoyed more had I not been facing the task of scaling the back of Roseberry Topping!

We came across past a folly then the real uphill work started again. I was pleading with my legs by this point as I started to grind to a halt and watched the people ahead of me get further and further away. Finally a voice called out “come on mum, you can do it” and I looked up to see my younger son peering over the edge at me. Matthew was perched on the top with his camera ready to capture each runner as they made it to the top and I was less than delighted with many of the ones of me! 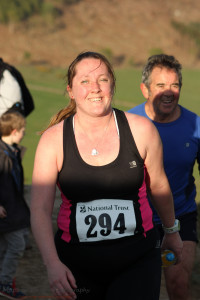 Oliver, my younger son who had given himself the task of mini-marshal in the absence of any marshals on the summit, directed me to touch the trig-point (or white thing as I prefer to call it!) then it was onto a long downhill. My pleasure at this was short-lived when I saw the potentially ankle-twisting stone which lined the path and I didn’t feel confident enough to do it at any great speed. Eventually though, the terrain cleared a bit for me to pick up the pace and I soon caught back up to the runners ahead of me….. but only until we hit yet another hard uphill!

This one is known as Little Roseberry and as the name suggests, it isn’t as high as the Topping itself. A marshal at the top was pleased to be relieved of his post as the back-runner and I passed him then, at last, I was told all the climbing was over and it was literally “all downhill from here!”

Having down several trails now, I am getting more confidence at letting myself go on the downhill stretches so once again I was able to catch up with the people ahead of me but didn’t quite have enough in the tank or the space on the path to get past them. Finally, the last stretch was ahead of us and my stubbornness and pride kicked in giving me the boost I needed to pull back two places on the final stretch. I felt a little guilty about this but at the end of the day, it is a race!

As I said at the start, I hate hills so I went into it knowing I was going to find it hard. However, it was a beautiful, varied route and I would probably do it again. My final time was 1:16:29 – certainly not my fastest 5 miles!

Next week at Albert Park there are several celebrations, most notably the event’s 7th birthday and Tracey’s 50th parkrun and Oliver’s 10th parkrun! Make sure you are there to partake in the cake!

The mini-Macks appear in the volunteer list – well done!

Halfway through May and the weather was a little more appropriate for the month than it has been recently!

Results below – The majority of runners seemed to be at Albert Park but there are a few regular names who are missing from Tees Barrage and Sedgefield… shout up if you ran out of area so we can add your results in!!

This week, mini-harrier Oliver set another PB SMASHING almost 6 minutes off his previous PB at Albert Park and Ged gave his PB a good tickling taking another 4 seconds off and planting himself firmly into the 70% age-bracket. Laura was just 10 seconds off her PB and Stephen was tantalisingly close too.

Well done to Laura for her 150th run a couple of weeks ago (now at a fabulous 152) – while not an official Milestone, it is certainly an achievement!! On the topic of Milestones, there will be a ‘milestone party’ on 30th May at Albert to celebrate Tracey’s 50th and Oliver W’s 10th.

Pies, peas and a pint, the reward for completing 5 laps of Redcar’s beautiful Locke Park.Friendly marshalls from Marske Harriers welcome you in. The event starts with a children’s fun run. Parents watch and encourage their youngsters around the course. Runners huddle in groups sporting their clubs logos. 3 Fairfield Harriers, Ged, Anne and Tracey look like the famous lemon top ice creams in their tribal shirts.We share stories of injuries and ailments then we shuffle to the start line. The Sun shines and the sky is blue on a lovely Spring evening. Then suddenly we are off. Tracey and I run together united in our desire to complete despite our bodies screaming this is a bad idea. Ged races effortlessly  ahead.The run is 5 one mile laps. Do not imagine geometric ovals, a lap is a meandering snake which weaves itself around lakes and over bridges. Helpful marshalls keep us on track. There are runners everywhere on this maze trusting they will eventually find the way out.We chat as we run and try and remember how many laps we have done. Fun banter abounds between runner and Marshall’s. Super fit athletes lap us on the right. We run on pushing our limbs forward. Hips, knees, joints remind us of their existence.Then finally relief and a smile as we cross the finish line. Fellow runners congratulate each other on completion. Then its off to the cricket club for a traditional North East supper and a chat with fellow runners.

A grey morning heralded the arrival of parkrun day but this did not dampen the spirits of those who ventured to Albert Park to celebrate Nick’s achievement of reaching his 50th parkrun!

No PBs set this morning but still a fantastic set of results as can be seen below:

As a runner, I tend to be a bit chaotic…. I’m usually dashing round 3 minutes before I head out the door trying to remember where I last discarded my heart rate strap or whether my running socks are dry.

I’ll be honest, I so very rarely warm up – while fellow runners are trotting back and forth before a race I can usually be found either nattering to someone or updating Facebook.

The following article, from Saltmarsh running, has made me think again and if you are naughty like me it will probably change your running habits too – it contains some good information on why the first mile or so usually feels rubbish and what you can do to be ready to run.

An interesting run as we passed through Teesside’s Industrial Heritage. Over the Newport Bridge which used to let ships through delivering and transporting coal and goods to Stockton. The River is straight because it was cut to make it easy for the vessels.

As we wobbled over the Millennium Bridge the marshal reassured us only 3 kms to go.  Then we snake through the canals of Stockton’s little Venice. On a Sunny day people sit out and Swans swim along the waterways.

May blossom confetti showered us as we ran to the finish line. Then finally Lisa Johnson is there to cheer us over the finish.

Familiar faces congratulate us for completing and funnel us to pick up our goodie bag with a welcome bottle of water and chocolate. We chat to our running friends and relax in the sun before we return home.